Last November I suggested that circumstantial evidence in the Penn State case indicated that Joe Paterno used his influence to cover-up cases of child sexual abuse committed by one of his coaches, and that university leaders probably went willingly along with it. http://ccfinlay.livejournal.com/189381.html

Today, former FBI Director Louis Freeh, who was hired by Penn State to investigate the case, determined that there is actual physical evidence that Paterno used his influence to cover-up child sex abuse committed by one of his coaches, and that university leaders definitely went willingly along with it: http://www.chicagotribune.com/news/sns-rt-us-usa-crime-sanduskybre86b05d-20120711,0,5217577.story

Ask Rae sometime how much I like to do the “I told you so” dance. (The answer is "too much." Or possibly "will you just shut up.")

Despite all the practice I get, it’s never going to be pretty. In fact, sometimes it’s more likely to get me a wholly deserved punch in the nose.

But today I wish I’d been wrong.

And there will be no dancing.

I will, however, offer praise for the Penn State community and their Board of Trustees for doing the right thing now, for taking independent steps to find out the truth, for sharing it publicly, and then, hopefully, for their willingness to do what they can to make things, if not right, because they will never be right, then better.

Yesterday Mitt Romney was inaugurated as the 45th President of the United States. Today he issued pink slips to members of Congress and federal courts, including all their staff.

“The American people have spoken and they want smaller government,” Romney said during this morning’s press conference at the White House.

Appropriate outrage over the Jerry Sandusky child sexual abuse scandal and the response of Penn State University has been expressed much more eloquently by Scalzi and others.

Despite this outrage, I still hear people standing up for Joe Paterno or defending the actions/inactions of the university. Because I like you -- no seriously, I like you a lot -- I applied my training as a historian and read all of the grand jury presentment against Jerry Sandusky, as well as scouring other sources, to create a timeline of events.

Between 1998-2008, there were four reported instances of child sexual abuse by Jerry Sandusky. The first three were reported at Penn State and all three investigations were discouraged from going further. Only the fourth, reported by the school of one of the victims, led to legal action.

You're entitled to your informed opinion. Now you have the information.

These are some of the complaints I hear about science fiction. "There isn't enough adventure/space opera SF." "There aren't enough minorities in SF." "Hard SF isn't accessible enough."

"I just want smart books that are fun to read."

To all of these I answer, "Then why aren't you reading Tobias Buckell?"

In 2006, Tobias Buckell published CRYSTAL RAIN, a novel that combined aliens, outer space colonies, and Buckell's own multi-cultural Carribean heritage. It was followed by two more books in what came to be called the Xenowealth series, RAGAMUFFIN and SLY MONGOOSE. RAGAMUFFIN was even a finalist for the Nebula Award for best novel.

SLY MONGOOSE opens with Pepper, a reoccuring character in the series, doing an orbital re-entry to a planet with nothing more than a spacesuit and a heatsheild.

"Pepper lay strapped to a blunt, cone-shaped heatshield with a hundred miles of Chilo’s atmosphere to fall through yet. The edges of the 2,000 degree fireball created with the shockwave of his reentry licked and danced at the edges of his vision. A small taste of hell, he thought, as the contraption under his back wobbled and threatened to overturn...."

If you love SF, how can you not LOVE that?

From the start, Buckell planned this as a 5-book series, with the 5th book bringing all the threads together in Pepper's story. But with all the changes happening in publishing, Buckell's publisher decided not to bring out the last 2 books in the series. Yeah, that's right: they published the beginning and the middle but they aren't going to publish the end.

So Buckell is going straight to readers with Kickstarter to raise the money he needs to write the next book. Kickstarter is a no-risk venture for readers. You pledge your money in advance; if Buckell reaches his goal, your account is charged, and six months from now (depending on how much you gave) you get a copy of the book. If he doesn't get enough pledges, then the project isn't funded, and you get all your money back.

But you also get no book. And my guess is, that if you love SF, you want this book to exist in the world.

There are only 2 days left before the project is cancelled, and the book still needs to raise a little more than $2000. Like I said, there's no risk to you. Pledge your money. Either you'll help bring a great book into the world or you'll get your money back.

Click here: http://www.kickstarter.com/projects/1548859355/the-apocalypse-ocean. Look it over. If you like the story you see, give some love to the project.

Folks, check out this all-star book-signing:

...plus some fellow by the name of C.C. Finlay. This is a group signing by the Blue Heaven authors, so it will be the only Ohio signing of the year for Bacigalupi, Prineas, McDonald, and van Eekhout, who are coming from all across the country to be here. We'll be talking about writing, workshopping, and our books for as long as people have questions. Hope to see some of you there.

Bear with me for the set-up here. Note: I'm not promising there's any pay-off if you bear with me. I'm just asking you to bear.

So I work as an executive assistant for a leader at a large university and part of my daily job is managing his calendar. My boss and one of the vice presidents cooperate on a bunch of major university projects and initiatives so they have a weekly meeting, but when conflicts come up his admin assistant and I will reschedule that meeting. Lately, because things are kind of crazy for both of them, we’ve rescheduled about six weeks in a row. And today it was my turn to ask for a change.

The very end of our conversation went something like this…

Me: Thanks so much!

Her: Thank you for accepting all of my change requests. It seems like we always manage to make it work somehow!

Me: You’re not old enough to remember the Wonder Twins, are you?

Her: Yeah, I have no idea what you’re talking about.

Basically I haven’t felt this old and out of touch since... well, that would be a couple weeks ago when I was trying to explain my McArthur Park joke to Rae.

Yeah, that one was amazing too. And have I ever told you about how awesome vaudeville was?! ZOMG!!

Now get off my lawn.

This is for the word nerds that AmyD sent to follow my twitter this morning. Some of you (and by "some" I mean "E" and "M[-----] P[------]") may remember it about from ten years ago, before the Age Of Blogs, when I posted things like this to the OWW mailing list.

I am sure I can't be spelling "coplative" correctly, as I cannot find it in any dictionary. But I know that is the word I want, even if I can't spell it.

Copula. Comes from the exact same root word you think it does.

Actually, copula is a compound word constructed from three roots:


Thus we can see that copula means, literally, you're a singer caught in the web.

When one reflects that medieval Scandanavian vikings conquered Sicily, much becomes clear. The word is a reference to Sinatra's connections to the Mafia. This is why Francis Ford Copula, or "Coppola" (an obvious nom de plume), was listed as the director of "The Godfather," which was a movie in part about a singer's involvement with the mob.

The connection to grammar derives from omerta, or the Mafia's code of silence, as the copulative case is the one that can remain silent, or unspoken.

(This is the talk I gave to the Friends of the Marysville Public Library on February 15, 2011, at the Veterans Auditorium.)

Libraries: more dangerous than they look.

On Sunday the Green Bay Packers meet the Pittsburgh Steelers for SuperBowl XLV in an epic match-up of obsolete rustbelt mascots. Packers? Steelers? Let’s face facts: these days in Green Bay the football team employs more people than the packing industry, and there isn’t a single steel mill left in the city of Pittsburgh.

It’s the 21st century, baby! So what would happen if we renamed sports teams to reflect the industries and personalities of their cities today?

The Pittsburgh Healthcare Workers.
When they get injured they treat themselves.
( Collapse )

I don't pretend this is a complete list, so feel free to make your own suggestions in the comments. 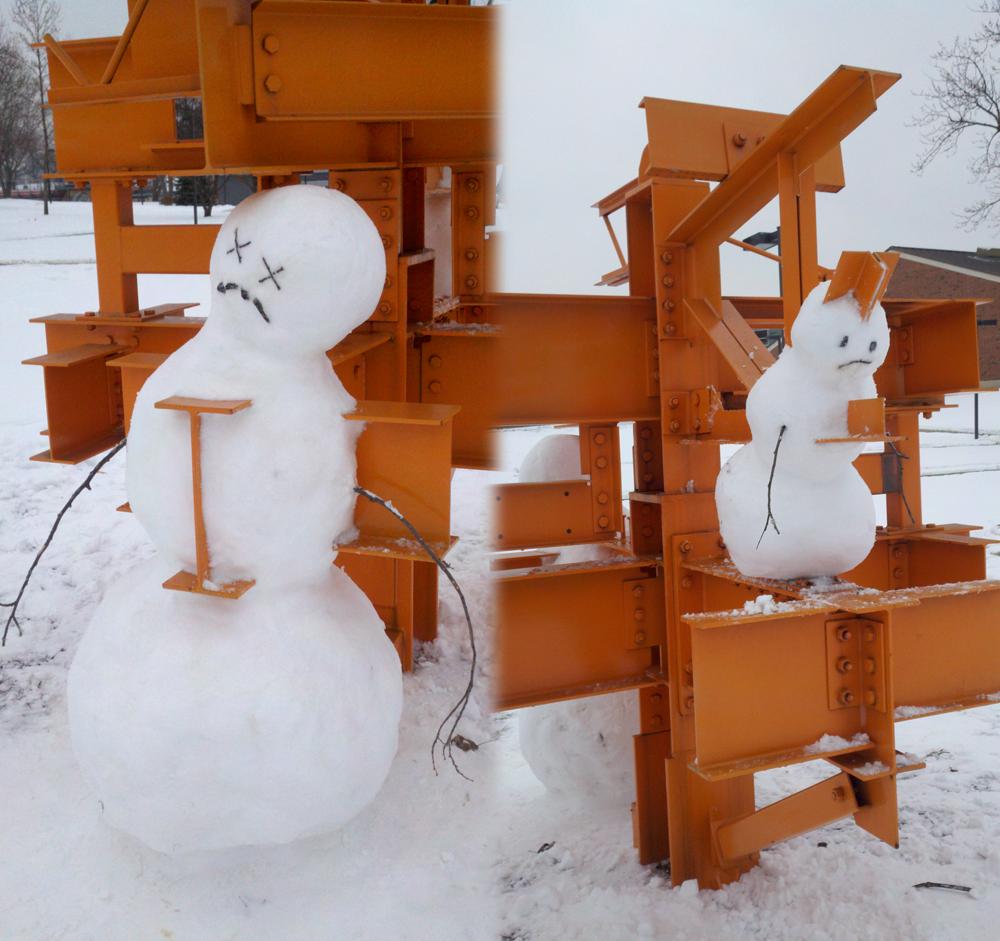 The steel sculpture in an Ellifritt Structure, which is used at colleges to demonstrate the different ways that steel beams can be connected. And snowmen abused.

(Tip of the hat to the Chronicle of Higher Education for the link. The Chronicle snagged it from The Daily What.)
Collapse